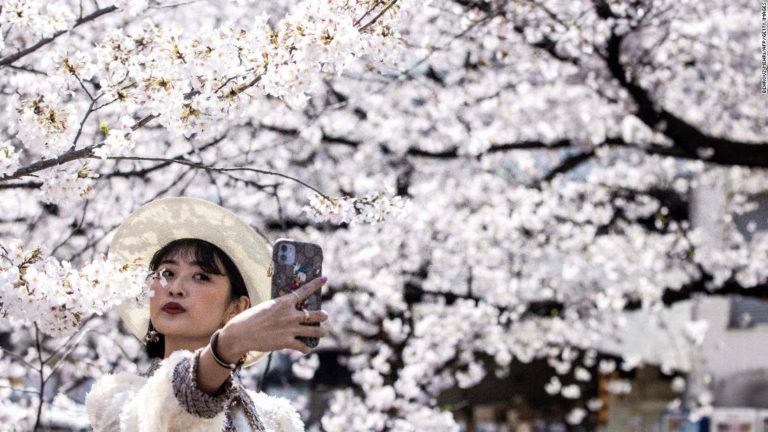 A woman takes a selfie with cherry blossoms in full bloom along the Meguro river in Tokyo on March 26, 2021. (Photo by Behrouz MEHRI / AFP) (Photo by BEHROUZ MEHRI/AFP via Getty Images)

(CNN)Think of Japan in the spring, and the image that comes to mind is likely the country’s famous cherry blossoms, also known as “sakura” — white and pink flowers, bursting across cities and mountains, petals covering the ground.

The flowers, which experience a “peak bloom” that only lasts a few days, have been revered in Japan for more than a thousand years. Crowds celebrate with viewing parties, flocking to the most popular locations to take photos and have picnics underneath the branches.

But this year, cherry blossom season has come and gone in the blink of an eye, in one of the earliest blooms on record — and scientists warn it’s a symptom of the larger climate crisis threatening ecosystems everywhere.

Yasuyuki Aono, a researcher at Osaka Prefecture University, has gathered records from Kyoto back to 812 AD from historical documents and diaries.

And in the capital Tokyo, cherry blossoms reached full bloom on March 22, the second-earliest date on record.

The peak bloom dates shift every year, depending on numerous factors including weather and rainfall, but have shown a general trend of moving earlier and earlier.

In Kyoto, the peak date hovered around mid-April for centuries, according to Aono’s data, but began moving into early April during the 1800s.

The date has only dipped into late March a handful of times in recorded history.

“Flowering and full bloom could be earlier or later depending on the temperature alone,” he said.

This year’s seasons in particular influenced the blossom dates, he added. The winter was very cold, but the spring came fast and unusually warm, so “the buds are completely awake after enough rest.”

Their early bloom, however, is just the tip of the iceberg of a worldwide phenomenon that could destabilize natural systems and countries’ economies, said Amos Tai, assistant professor of earth science at the Chinese University of Hong Kong.

There are two sources of increased heat, which is the main factor making the flowers bloom earlier: urbanization and climate change.

With increased urbanization, cities tend to get warmer than the surrounding rural area, in what is called the heat island effect. But a bigger reason is climate change, which has caused rising temperatures across the region and the world.

And these earlier dates aren’t just a matter of tourists scrambling to catch peak bloom before the petals all fall — it could have a lasting impact on entire ecosystems, and threaten the survival of many species.