With Heng Swee Keat out of the running, who will be Singapore’s next prime minister? 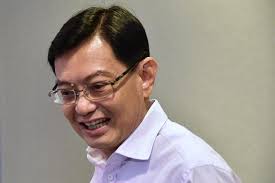 There had been murmurs for a while about whether Singapore’s deputy prime minister Heng Swee Keat would be the country’s next leader after a poor showing in last year’s general election. Yet Singaporeans were still shocked by Thursday’s announcement that Heng, 60, was going to step aside and make way for a younger successor.

Besides, it was only in July, following Heng’s surprisingly narrow electoral victory, that his contemporaries in the next-generation cabal of ministers – known as the 4G leadership – reassured the country that Heng was still PM-designate. Foreign minister Vivian Balakrishnan at the time said the 4G was in “full unity” behind Heng.

With the coronavirus pandemic delaying the leadership transition, Heng reasoned that he would be in his mid-60s by the time he took over. He also cited the stroke he suffered in 2016 – two years before he was anointed as the future prime minister – and said that while he was in good health now, it was better for the nation “for someone who is younger to tackle the huge challenges ahead” and have a “long runway” as the next leader. Along with dropping out of the race, Heng is also giving up his other portfolio as finance minister, paving the way for a cabinet reshuffle in two weeks.

A statement issued by 32 members of the 4G leadership acknowledged that Heng stepping aside was a “setback for succession planning”.

Surprises like these are unusual in Singapore. When its founding prime minister Lee Kuan Yew handed over the reins to Goh Chok Tong in 1990, Singaporeans had known for five years that Goh was going to take over. Similarly, it was clear from that same year, when Goh appointed Lee Hsien Loong as his deputy prime minister, that Lee was going to be the country’s third premier.

Lee, 69, had earlier said he wanted to step down before he turned 70, but is instead staying on to steer Singapore through the pandemic. The big question now for the island nation is who will take over from Lee.

Political observers said the upcoming cabinet reshuffle would offer clues, and they are preparing to read the tea leaves. Reuben Wong, associate professor of political science at the National University of Singapore, said he was closely watching who would take over the finance ministry, given that it was an important portfolio.

“It might not be the only indicator, but it is one of the key ones,” he said.

WHO ARE THE CONTENDERS?

Woo Jun Jie, senior research fellow at the National University of Singapore’s Institute of Policy Studies, said these four ministers were the most senior and prominent members of the 4G leadership, fronting some of the most important ministries. “For this reason alone, they have long been identified as front runners for key leadership positions. Aside from age and policy experience, these four leaders have also proven to be highly effective communicators,” he added.

Seen as the most senior and experienced member of the 4G leadership team, Chan Chun Sing, 51, in 2013 became the first among the four contenders to become a full minister. He entered politics in 2011 after a decorated career in the armed forces, during which he rose through the ranks to become Chief of Army.

People who regularly interact with him in his capacity as trade and industry minister say the Cambridge-trained economics graduate is a highly competent technocrat with a sharp analytical mind. At the same time, however, Chan’s folksy mannerisms and public speaking gaffes have elicited criticism. In one such slip-up during an interview last year, Chan appeared to mention in passing that cotton came from sheep. He later clarified the remark, saying he “spoke too fast”.

While bureaucrats who spoke to This Week in Asia on condition of anonymity said Chan was the right fit for the job due to his technocratic credentials, not all commentators agreed. Terence Lee, an associate professor at Murdoch University in Australia, said Chan had “no traction with the public” and lacked an “international statesman aura”. Since Heng’s announcement on Thursday, more than 2,000 people have signed a Change.org petition to “persuade PM Lee not to put up Chan Chun Sing”.

The Australia-based Singapore watcher said it was likely some of the prime minister’s peers in the third generation of the ruling People’s Action Party were keen on Chan. But these heavyweights were nonetheless likely to be aware of the need to heed “populist calls” on the matter, he added.

Many view education minister Lawrence Wong, 48, as a dark horse. He has largely remained low profile for most of his political career, but was thrust on to centre stage last year as co-chair of Singapore’s coronavirus task force.

Wong’s performance during the regular media briefings was well received as he portrayed himself as a confident leader, rarely fumbling when faced with questions about the pandemic. He once teared up while delivering a speech in parliament thanking health care workers, and videos of his emotional tribute were quickly circulated, winning him the support of many millennials.

Reuben Wong, the associate professor, said Wong had performed well in that role and exceeded many people’s expectations: “He is able to be calm, objective, and reassuring. I think that’s very important.”

Inderjit Singh, a PAP stalwart who served as a member of parliament from 1997 to 2015, told This Week in Asia last November that Lawrence Wong was “emerging as a potential choice as a future PM”.

Transport minister Ong Ye Kung, 51, would have entered politics at the same time as the other three men – if he had won the first time he contested an election. Instead, his team unexpectedly lost the group constituency of Aljunied in the 2011 polls. The former top civil servant then took a job in the private sector before running in the 2015 election. While he was thought of as a political greenhorn at the time, Ong has since gained experience helming two key ministries – education and transport.

Wong, the associate professor, said Ong had also mostly avoided controversy. “In general, people view him as credible, as somebody whom they can respect,” he said.

Ambassador-at-large Tommy Koh had previously told This Week in Asiathat Ong was a good strategist and tactician who was charismatic and eloquent. Koh recently commented on one of Ong’s Facebook posts that the latter was a “great leader”. The two had previously worked together on Singapore’s free trade agreement with the United States.

In his stint at the education ministry from 2015 until a post-election cabinet shake-up last year, Ong made changes to reduce the emphasis on academic results. He took away the streaming system that students go through at Primary 4, aged 10, and reformed the Primary School Leaving Examination scoring system so students are now scored in banded grades instead of aggregate points. As transport minister, Ong worked to reopen Singapore’s borders and strike reciprocal travel arrangements during the pandemic.

The son of former cabinet minister Lee Yock Suan, Desmond Lee, 44, is the youngest among the four contenders. He also entered politics in 2011, but took six years before he was made full minister – although he was at that point the youngest minister to take office, at 40.

Wong of the National University of Singapore felt Lee had good support from within the party as well as from voters. He pointed out that Lee was moved from the Jurong constituency – where he had served for two terms – to the West Coast ward in last year’s election to contest Tan Cheng Bock, a former PAP stalwart known to be influential in the area. “The fact that [the PAP] used Desmond as the anchorman for West Coast against somebody like Tan Cheng Bock already shows that this guy is heading up,” Wong said.

Borrowing Heng’s analogy, Wong said Lee had a “long runway” ahead of him, adding that he had proven his ability over the years, and had not been embroiled in any controversies.

DOES IT MATTER WHO GETS THE JOB?

Political observer Chong Ja Ian said it should not matter who was appointed prime minister as the PAP had repeatedly stressed it was a “collective” 4G leadership that worked as a team. He also noted that the front runners were seemingly cut from the same cloth, came from similar backgrounds, and were part of the “military-bureaucrat elite”.

In fact, both Chan and Ong were government scholars who read economics at prestigious universities in Britain. Wong was also a scholar who studied economics in the US, while Lee read law locally.

“If what the PAP and 4G claims is right, then it shouldn’t matter. They work as a team,” added Chong, also an associate professor at the National University of Singapore. “Unfortunately, there isn’t enough transparency with the selection process for anyone outside elite PAP circles to know or independently corroborate.”

WHEN WILL WE KNOW WHO IS THE NEXT PM-DESIGNATE?

While Wong of the National University of Singapore suggested that a clearer picture could emerge when the cabinet reshuffle took place in two weeks, Lee of Murdoch University said it was unlikely there would be any official transition announcements for at least another year.

This is in line with Prime Minister Lee’s Thursday signal that the process could take up to several years, and that the party was working with a “reasonable time frame” of having a successor in place by the next election, which must be called by November 2025.

During the press conference, Lee said the “neatest” thing to do would be to have a politician step in when another stepped out, and that would have been “seriously considered” if the process took “a few days or weeks, or even a couple of months”.

“But if we are talking about a process which is likely to take a few years, then once the first development has taken place … I think it is important material information which is our responsibility to tell our stakeholders.”

Lee also stressed that the 4G would take “longer than a few months” to decide on a new leader, but expressed hope that this would be achieved before the next election. “I have no intention of staying on longer than necessary,” he said.