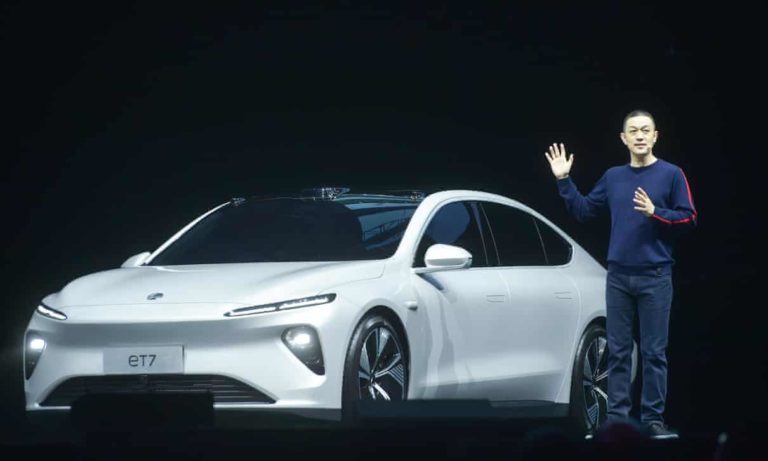 Tesla boss Elon Musk is not known for admiring his competition, but when Chinese manufacturer Nio made its 100,000th electric car last week, he offered his congratulations.

It was a mark of respect from a chief executive who had been through “manufacturing hell” with his own company. Yet it is also a sign of the growing influence of China’s electric carmakers. They are hoping to stake out a spot among the heavyweights of the new industry and bring a significant new challenge to Tesla – and to the rest of the automotive industry as it scrambles to catch up.

Tesla mania and cheap money have pushed the market valuations of a clutch of electric carmakers to astonishing levels. Tesla’s value topped $830bn (£600bn) in January (it is now down at about $700bn – still almost three times the size of its nearest rival, Japanese carmaker Toyota).

Chinese rivals Nio, Xpeng and Li Auto have all rapidly risen in value to rival much bigger and longer-established manufacturers – despite having never made an annual profit – on the back of US stock market listings that brought access to retail investors, although their values have fallen steeply from highs earlier this year.

Their fundraising successes have allowed them to pour money into competing with Tesla in China. Now they are eyeing the European electric car market – the biggest in the world.

This would further squeeze legacy carmakers such as Volkswagen, which are trying to rapidly expand electric car production. Premium carmakers including the UK’s Jaguar Land Rover or Germany’s BMW could also lose out if Chinese brands take some of their wealthy customers. Jaguar has pledged go all-electric by 2025 and BMW said last month that half its European sales will be electric by 2030.

China’s government spotted the opportunity to dominate a new sector by giving big subsidies to its electric car industry. The resulting crop of Chinese manufacturers is following the Tesla playbook and it, too, is unencumbered by the costs of winding down internal combustion engine factories, according to Philippe Houchois, automotive analyst at US investment bank Jefferies.

Li Auto, Nio and Xpeng could grow into some of Tesla’s biggest rivals – Reuters reported last month that all three are eyeing listings in Hong Kong. Another Chinese-owned startup, Faraday Future, said in January that it would list in the US via a merger with a special purpose acquisition company (Spac), raising $1bn.

“If you’re Tesla, all of a sudden they are competing on the ground, but they are also competing in access to capital,” Houchois says.

Some Tesla rivals have comparable technology and similarly aspirational brands. Hui Zhang, Nio’s executive vice-president for Europe, told the Observer the luxury carmaker aims to combine elements of Tesla and of Apple, the world’s most successful consumer technology company.

Nio, known as Weilai in its home market, aims to start selling vehicles in Europe later this year. Its factory can currently produce about 120,000 cars a year, significantly fewer than the near-500,000 Tesla made in 2020. Nio avoided bankruptcy in early 2020 when the city of Hefei bailed it out, but it has raised more than $4.5bn in stock and bond offerings in recent months, amid soaring investor demand.

Tesla will have an advantage in Europe when it opens a factory in Berlin as early as this summer, but China’s carmakers have the capital to open production in Europe too. Matthias Schmidt, a Berlin-based automotive analyst, says Chinese manufacturers will have an opportunity while Europe’s giants are eking out profits from their petrol and diesel models, plus hybrids.

“Chinese manufacturers hoping to introduce battery electric vehicles,” says Schmidt, “ have a four-year window in which to gain traction in a market that is to some extent playing with a B team array of electrified products, with limited supply until the end of the first half of the decade.”

Chinese companies are already heavily involved in the electric car boom through lithium ion battery manufacturing. China’s Contemporary Amperex Technology – better known as CATL – is a supplier to Tesla, has a factory in Germany, and last year said it had developed a battery capable of surviving a million miles of driving and recharging.

Another battery maker that also produces electric cars is BYD, backed since 2008 by US investment billionaire Warren Buffett. Shares in the company, listed in Shenzhen, have more than tripled since the start of 2020 – even after falling from record highs at the start of February. It capitalised on investor interest in January, selling stock worth $3.9bn.

Deep-pocketed rivals can spend heavily on technology, which adds to the pressure on Tesla. Nio’s big selling point is that its batteries can be swapped in minutes by robots – removing the threat of range anxiety for drivers of electric vehicles. Xpeng, valued at $24bn, has invested heavily in autonomous driving software, so could rival Tesla through lucrative sales of subscription-based self-driving capabilities. Its P7 sports saloon could target potential buyers of Tesla’s Model 3 and Model S in Europe, rather than the wealthier customers courted by Nio.

Xpeng, chaired by tech entrepreneur He Xiaopeng, has already launched its G3 SUV in Norway –which, thanks to government subsidies, last year became the first country to see sales of electric cars outstrip those of internal combustion engines. Xpeng is now deciding which European markets to target next, its vice chair, Brian Gu, told Automotive News in January.

Analysts have repeatedly cautioned that the electric car industry, from Tesla downwards, is in the midst of a bubble. Yet even if valuations tumble further after recent steep declines, the makers have already enjoyed cheap funding that will allow them to vie for a significant slice of the market.

Tesla Model Y
Musk’s seven-seater SUV will be the first off the production line in Berlin. The performance version can manage 0 to 60mph in 3.5 seconds.
Price $34,000 (£24,600) Range 303 miles (according to the stricter WLTP standard) – THE GUARDIAN