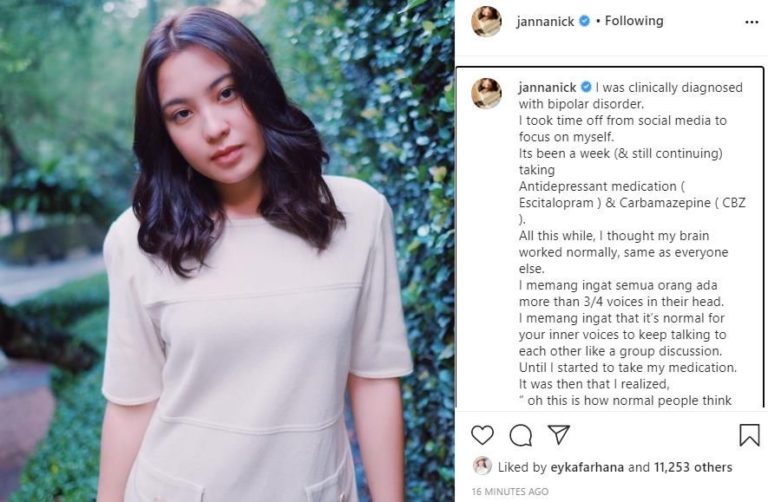 KUALA LUMPUR, April 23 — Actress Janna Nick broke her social media silence and announced that she has been diagnosed with bipolar disorder.

Janna or her real name Nurul Jannah Muner, shared the news yesterday via her Instagram.

“I was clinically diagnosed with bipolar disorder.

“I took time off from social media to focus on myself.

“It has been a week and I’m still continuing taking antidepressant medication such as Escitalopram and Carbamazepine,” read her caption.

The Mek Kelate actress has also revealed that she attempted suicide twice before and had been having suicidal thoughts since she was eight due to harassment from her childhood.

“I tried to take my own life when I was 14 years old by swallowing a handful of Panadols mixed with other medicine I could find at the time.

“I don’t have a perfect family. I was away at boarding school. I could only watch from the window when all my friend’s parents visit them every weekend.

“Second suicide attempt was a year after that, PMR year, I cut my own wrists in front of my younger sister,” the 26-year-old actress said.

Janna also admitted that she thought it was normal for her to hear multiple voices in her head until she started taking her medicines.

She said she was unsure whether her newly diagnosed illness was from genetics or from her past.

Her post has garnered over 100,000 likes with supporting comments from fellow artists and fans.

“Mental illness is nothing to joke about. It’s very courageous of you to be speaking out about it!

“May Allah ease everything for you dearest Janna, you are loved by many, we are all by your side,” said actress Zahirah Macwilson.

“Everyone has their story to tell, their journey to conquer.

We love you and you’re so strong to come out and share this news, it helps others who may not know what they are going through,” commented actress Diana Danielle.

“Thank you for being an inspiration to those who may be going through the same as you. May Allah ease your journey.”

Earlier this month, Janna broke down in tears while driving in a now deleted video, that posted on her Instagram.

The actress admitted that her breakdown was due to overwhelming pressure she was under at that time.