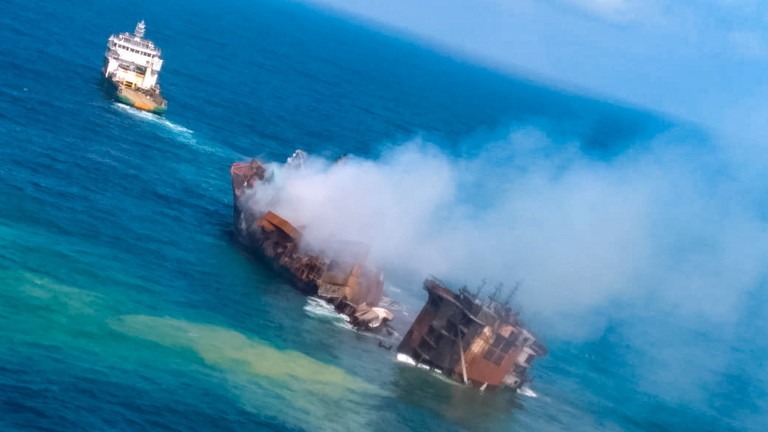 The MV ‘X-Press Pearl’ cargo ship has begun sinking off the Sri Lankan coast after being ablaze for nearly two weeks. The ship was towed away from the island to minimize the damage from the expected massive oil spill.

The Singaporean-flagged cargo ship began taking in water on Wednesday, halting efforts to put out the enduring fire.

“The salvage company involved in X-Press Pearl has indicated that the vessel is sinking at the current position,” Sri Lankan fisheries minister Kanchana Wijesekera said in a tweet.

The Negombo Lagoon, near which the crippled vessel is located, has been closed for entry, while fishing operations have been suspended along the coast.

“Emergency measures are [being] taken to protect the lagoon and surrounding areas to contain the damage from any debris or in case of an oil leak,” the minister added.

Images released by the Sri Lanka Air Force show the partially submerged vessel being towed away from the coast by a tugboat. The badly burnt vessel was still emitting a plume of smoke as it began to sink.

The ship is believed to still have a large amount of oil in its tanks – it had some 350 metric tons on board when the blaze broke out – and its sinking is likely to produce a major spill. The country’s Marine Environment Protection Authority (MEPA) said it expects beaches along a 30-kilometer (50-mile) stretch of the coast to be hit by the impending disaster, according to media reports.

The ill-fated vessel caught fire back on May 20, when it was anchored off the island’s west coast. The ship was carrying nearly 1,500 containers of assorted chemicals, including 25 tons of nitric acid. Despite the efforts of the Sri Lankan and Indian militaries, the blaze has not been fully extinguished.

Multiple containers fell off the ship during the nearly two-week fire, spilling their hazardous contents into the water. Beaches of Sri Lanka have already been littered with various debris, including a large haul of plastic pellets. MEPA has launched operations to clean up the detritus as it gets washed onto the coast.

The MV ‘X-Press Pearl’ has had an extremely short career, as it was only delivered to its owner X-Press Feeders in February this year. The vessel has made only a handful of voyages, catching fire shortly after it made its third – and last – port call.SOURCE: RT