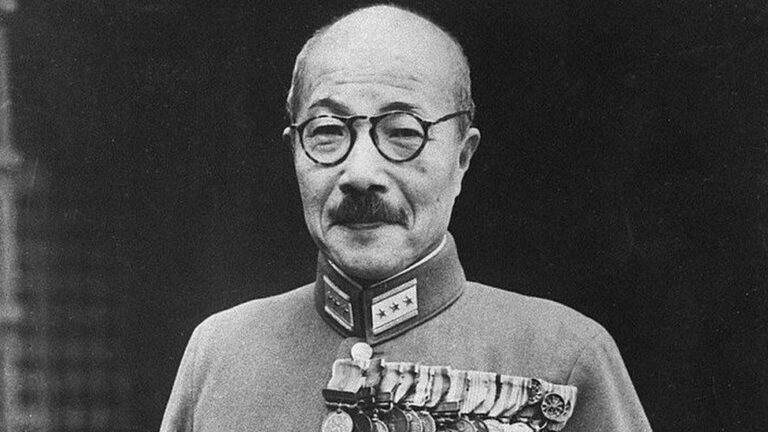 The remains of Japan’s World War Two prime minister were scattered over the Pacific Ocean after his execution, US documents have revealed.

Officials were concerned supporters of Hideki Tojo – one of the men behind the Japanese attack on Pearl Harbor in 1941 – would try to find his body and treat him as a martyr.

After his execution for war crimes in 1948 he and six others were cremated.

A US Army aircraft then dropped their ashes in the ocean.

Japanese lecturer Hiroaki Takazawa at Tokyo’s Nihon University found the declassified documents at the US National Archives in Washington DC.

“I certify that I received the remains, supervised cremation, and personally scattered the ashes of the following executed war criminals at sea from an Eighth Army liaison plane,” US Army Maj Luther Frierson wrote in one documents dated 23 December 1948 – the day Tojo and six others convicted.

Underneath are the names of the seven men, including Hideki Tojo’s.

Maj Frierson wrote that he witnessed their execution and then boarded a plane with their remains – placed in separate urns. They flew to “a point approximately 30 miles (48km) over the Pacific Ocean east of Yokohama where I personally scattered the cremated remains over a wide area.”

Frierson added that the ovens used for the cremation were “cleared of the remains in their entirety”, adding that special care was taken “to preclude overlooking even the smallest particles of remains”.

Speaking to the Associated Press news agency, Mr Takazawa said US officials were determined to stop any supporters of Tojo’s find his ashes.

“In addition to their attempt to prevent the remains from being glorified, I think the US military was adamant about not letting the remains return to Japanese territory … as an ultimate humiliation,” he said.Despite there being no remains to bury, the executed men are enshrined at Japan’s controversial Yasukuni Shrine.

The Shinto shrine is dedicated to the souls of about 2.5 million Japanese men, women and children who have died for their country since its foundation in 1869. Among those are 14 convicted Class A war criminals, including Tojo and the six others.Politicians on the right see it as a symbol of patriotism. But those on the left and victims of Japan’s imperial conquests – including China and South Korea – criticise it as glorifying Japan’s militaristic past.
Who was Hideki Tojo?

Hideki Tojo was a general in the Imperial Japanese Army who served as Japan’s prime minister from 1941 to 1944.

He vocally supported Japanese expansion and a pre-emptive attack on the US and European colonial powers. As prime minister, he oversaw Japan’s attack on Pearl Harbor on 7 December 1941 – the event which brought the US into WW2 – and his country’s conquests in South East Asia and the Pacific.

Tojo lost the support of Japan’s Emperor Hirohito in 1944 as the war turned against Japan and he was forced to resign.

After the country’s unconditional surrender in September 1945 following the US atomic bombings of Hiroshima and Nagasaki the former prime minister tried unsuccessfully to kill himself as US troops surrounded his home. US veteran who captured Tojo dies

Tojo was convicted of war crimes at an international military tribunal in 1948, including waging wars of aggression and ordering inhumane treatment of prisoners of war.

He was sentenced to death that November and executed by hanging the following month. SOURCES: BBC LONDON