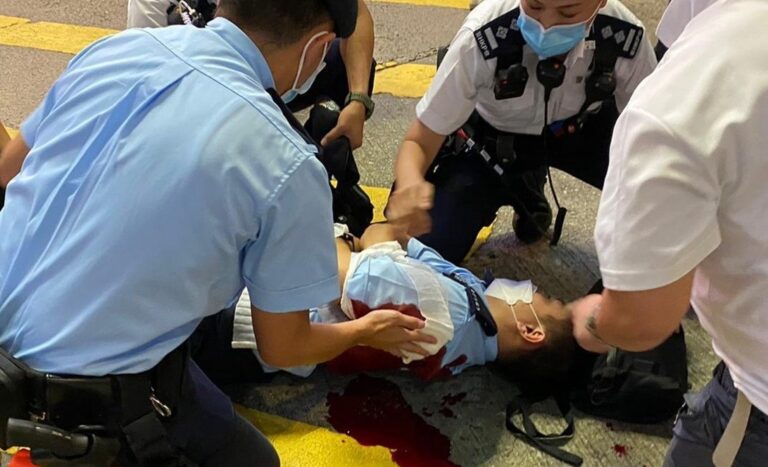 A lone assailant died after he stabbed a police officer and then himself on a busy Hong Kong street on Thursday night as the city marked the 24th anniversary of its return to Chinese sovereignty, in what the security chief called a “terrorist attack”.

Newly installed Secretary for Security Chris Tang Ping-keung said preliminary investigations showed the assailant was a “lone wolf” and police were still probing the man’s background. The case had been classified as attempted murder, he added.

The force said the 28-year-old Police Tactical Unit officer was knifed in the back outside the Sogo department store in Causeway Bay at around 10pm by a man who then used the weapon on himself.

A Hospital Authority spokesman said the officer’s condition improved on Friday morning from critical to serious.

The officer, who has served on the force for eight years, suffered a 10cm-deep wound and the weapon pierced his lung.

He was admitted to the intensive care unit at Queen Mary Hospital in Pok Fu Lam and required urgent surgery, sources said. Air and blood were found in his chest cavity, while a scan showed his heart had shifted.

The attack was caught on camera and a video clip of the crime was widely circulated online. The 50-year-old suspect was seen lying in a pool of blood after he was subdued by officers at the scene.

He was later certified dead at Ruttonjee Hospital in Wan Chai.

Raymond Siu Chak-yee, who took over as police commissioner from Tang last week, rushed to the scene shortly after the attack.

The violence came at the end of a day on which, for the first time on a handover anniversary, there were no mass protests after police locked down the traditional gathering point for demonstrators, banned activists from setting up street booths and maintained a heavy presence across the city.

Chief Executive Carrie Lam Cheng Yuet-ngor, who had just returned from Beijing where the Communist Party was holding its centenary celebrations, strongly condemned the violence and wished the officer a speedy recovery.

Speaking to the press at the airport, Lam described the assault as a “clear affront to the safety of society, and a disregard for the rule of law”.

She also pointed to an incident earlier on Thursday where flammable objects were thrown near her official residence and a recent discovery by police of materials capable of being used for making explosives.

“These show that even though the national security law after a year has turned Hong Kong from chaos to order … we still need to stay vigilant and think of danger in times of safety,” Lam said.

Police would investigate whether the assailant was connected to any organisation, she added.

Tang, speaking outside Queen Mary Hospital in the early hours of Friday, took aim at those who incited hatred.

“I would like to state that it was not just the assailant who was responsible for causing this incident, but also many people who have encouraged violence and incited hatred towards society and the country, and have beautified these violent acts,” he said, with the police chief at his side.

“These promoters also have blood on their hands.”

Tang said police had found a computer in the suspect’s home and items which had radicalised him, but he would not provide any more details on the contents or the background of the man, including whether he had a criminal record or mental illness.

But he defended the police decision to ban the annual July 1 protest, saying it would be “putting the cart before the horse” to claim it had deprived the public of its freedom of expression and caused people to resort to violence.

At the scene of the attack, witness Michael Gazeley said he heard some noise at around 10pm while taking photos near Sogo. He then saw the injured officer lying on the ground, with many of his colleagues rushing in his direction.

“It was all peaceful and normal. Then a scream. Lots of police then ran to help their injured colleague,” he said.

Earlier in the day, the force imposed a lockdown on Victoria Park in Causeway Bay by invoking the Public Order Ordinance at noon to close six football pitches, the basketball courts, central lawn and connecting pathways.

The small number of protesters stood in sharp contrast to last year’s July 1, when thousands defied a coronavirus-related police ban on the annual march by opposition activists.

Senior Superintendent Liauw Ka-kei said the decision to close the park was made after assessing relevant risks, pointing to online appeals for residents to participate in the march – banned this year by police – and the Tuesday arrests of two men held for possession of explosive materials.

Cans of petrol and a fuel canister for a portable stove were also tossed onto a grassy area leading up to Government House, the chief executive’s official residence, on Lower Albert Road in Central. No one was injured and no arrests were made, he said.

The force had earlier said it would deploy 10,000 officers across the city, which was also marking the 100th anniversary of the founding of the Communist Party. Among the events to celebrate the centennial was a 3D video show at Tamar Park in Admiralty.

As the force banned the setting up of booths in Causeway Bay, at least five civic groups and a political party moved to neighbouring Wan Chai to hand out fliers. On the other side of Victoria Harbour, some groups planned to hang banners or distribute leaflets in the busy Mong Kok shopping area.

Three members of the Confederation of Trade Unions were stopped by police in Causeway Bay as they were on the way to set up a booth. The trio were allowed to leave soon after but barred from setting up their stall.

At about the same time, officers arrested a man and two women elsewhere in the district as a crowd began to gather and chant slogans despite repeated warnings, according to police. The trio were detained for disorder in a public place, while the man also failed to show his identity card.

Citizens’ Radio, a station founded by activist “Bull” Tsang Kin-shing, set up a booth – the largest seen in the area – outside Wan Chai MTR station and displayed the faces of the dozens of opposition figures behind bars, with the words “hang in there comrades till dawn”.

Tsang said that within three hours hundreds of passers-by signed a petition and wrote notes to those detained.

“People are quite responsive, as they know they can’t do much under the national security law,” Tsang, who was among those arrested over the July 1 unauthorised assembly last year, said.

Across the harbour in Mong Kok, police prevented confederation representatives from unfurling banners from a footbridge above Mong Kok Road.

Officers said they had not applied to hang the banners in a public place and warned that one reading “The grass-roots class needs justice ” could “incite hatred” among the public.

“We are only speaking out for [lower-income residents] and even that is not allowed,” the group’s Danny To Chun-ho said.

Police cordoned off the area twice briefly as they dealt with the group, which eventually left the area.

Without a July 1 rally to attend, supporters in Mong Kok turned to businesses that aligned with their political leanings, so-called yellow shops, to make a stand.

“You can’t do anything now and that’s the only thing left for us to do,” said student Luka Chan Pak-lam, 22, who visited the Yeah Pot Pop Up Market.

Dozens of residents, meanwhile, enjoyed a “3D show” hosted by the Hong Kong Celebrations Association to mark the Communist Party’s 100th anniversary, with some dressed in red and holding mini national flags.

The 20-minute video show, in Mandarin, illustrating the history and successes of the party runs until 11pm on Thursday, with participants entering the venue in small batches.

One spectator surnamed Chung, wearing a red shirt with the slogan “Stop interfering with China’s internal affairs”, said she was there to show support for the party.

“I was born and grew up in Hong Kong. Before the 2019 riots, I also disliked mainland China a bit,” she said. “But after the 2019 riots … I have awakened by applying critical thinking and looking at things from both sides.”