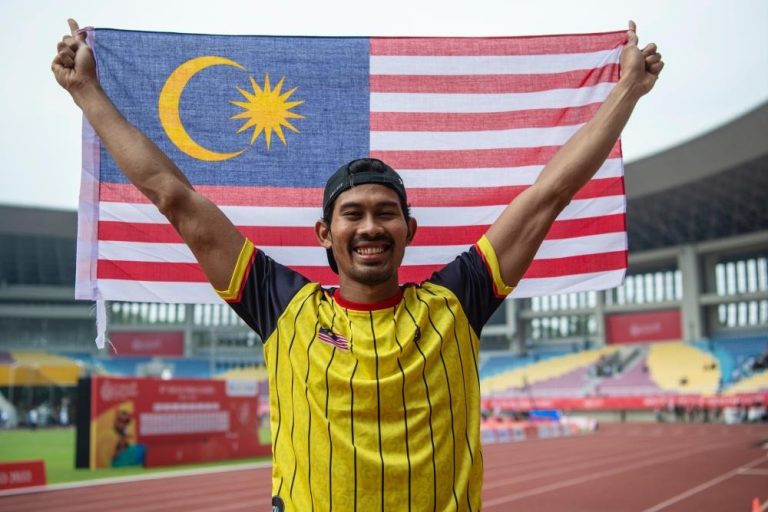 The 25-year-old from Perlis, who made his debut at the 2013 APG in Myanmar, cleared a distance of 7.20m at the Manahan Stadium here, to clinch his fourth consecutive gold medal.

Abdul Latif’s teammate Zulkifly Abdullah who had only managed a bronze medal at the 2017 Kuala Lumpur games, clinched the silver with a distance of 6.43m after edging Singapore’s Suhairi Suhaini who managed 5.78m.

Though Abdul Latif’s effort today was nowhere near his world record of 7.64m which he had set during the 2018 APG in Jakarta, he was satisfied with his performance because the APG here was his first major competition since suffering a groin injury at the 2020 Tokyo Paralympics last September, where he managed to defend the gold he had won at the 2016 Rio de Janerio Paralympics.

“I dedicate this medal to my family because this could be my last competition this year and as a bachelor. After this, I will prepare for the 2023 APG in Cambodia and 2022 Asian Para Games in Hangzhou, China. My plans will depend on the programme prepared by my coach,“ said Abdul Latif who is expected to end his bachelorhood soon.

“It was a very good experience for me after deciding to participate in this event because the interval between the 400m and 1,500m events tomorrow is only one hour. So, I have withdrawn from the 400m. I tried to go for gold but was not good enough,” he added.

Another Malaysian paralympics ace, Mohamad Ridzuan Mohamad Puzi, boosted his medal collection at APG by winning silver in the men’s 200m T36/37 (cerebral palsy) with a time of 25.440s, after having won the 100m gold in the same classification yesterday.