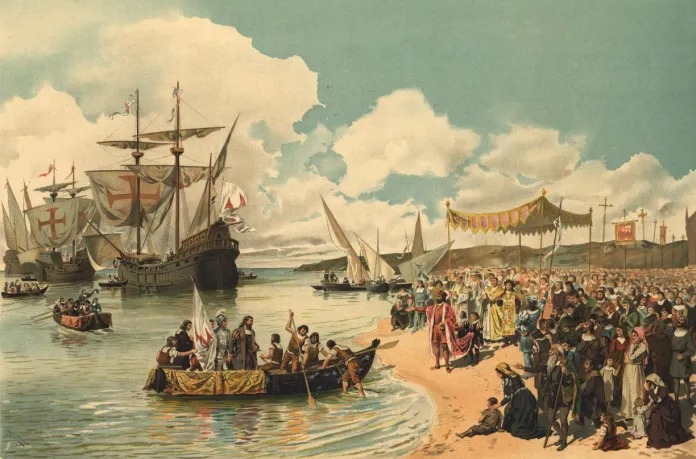 THE Ferringhi, Farang, and Franks have their origins at a particular moment in history, geography, and identity formation. It is an ethnography, of not only a Malay marker of the European, but by other societies that have come into contact with the natives of “the northern quadrant” where “the sun is far from the zenith – increasingly far the farther north they go – such as the Slavs, the Franks, and other nearby nations,” thus described the encyclopedist Masᶜūdī (d. 956-957). It is a cultural boundary, originally separating the Islamic world from Europe.

The Ferringhi is an example of new knowledge in the Tanah Air, much from such works, as well as encounters and narratives from the land of the Franks. This new knowledge comes from the new science of “jughrafia” after the Greek.

The Ferringhi is the Malay reference to the European. The Ferringhi appears in classical Malay texts, variably spelt in Rumi as Ferenggi, Ferringi, Peringgi or Pringgi.

The many versions of the Ferringghi then appeared in what was then called Asia Minor, through the Indo-Persian world, and in littoral societies from East Africa to the Malay Archipelago and further east.

It was from the German word from which France derives its name, hence the Franks, referring to the empire by that name ruling a large part of Europe, in what is now France, Germany, Switzerland, Italy and Austria for centuries. These were the places from where a large number of the Crusaders came from. They were called Franks. To the Arabs, all Europeans are associated with the word “Frank,” hence Firinja, Firinjah (plural), Firinji (singular); Ifranj, Afranj (another plural term), and Ifranji, Afranji, denoting the singular.

To the Greeks, who are located outside the “Frankish empire,” it is Frangos, Firanja. To the Turks, it is Ifrangi . In Syriac, referring to “a European” coming from Western Europe, the word is Frang. In Ethiopean it is Faranj.

As Arab traders travelled toward the east, to the Indian subcontinent and beyond the Malay Archipelago, the term became incorporated into the languages of the communities and groups residing along the coast of the Indian Ocean, and Indo-China. Among the Malays, it was initially used to describe the Portuguese, but later used for all “whites.”

And Batu Ferringhi in Pulau Pinang is not unrelated to the Europeans. My memory of the origin of the place is that it means “Portuguese” or “foreigner’s rock”. This fairly rocky stretch of beaches on the northern edge of the island, popular for picnics, and camping, was where ships from the West, where the Malays then called “orang dari atas angin” (those above the wind) would stop over to replenish their supplies (of fresh water). We know for sure that the Portuguese had anchored there and explored the island based on a description of its name in earlier maps – Pulo Pinaom. That is Portuguese for the betel-nut island.

“Batoo Fringy” was also noted as the place where Batu Ferringghi now stands. The Malays on the island and in mainland Kedah (Gunung Jerai is in close proximity and much visible on a clear day) would have encountered the Ferringhi there, not only the Portuguese, but also other Europeans. The moniker itself depicts an early encounter between East and West. In the Malay narrative, the Ferringhi was largely seen in neutral terms.

In Cambodia and among the Khmers, the foreigner white is the Barang, while the Vietnamese version is Pha-rang, or Pha-lang-xa. And even down in the southern Pacific, the Samoans and the Maoris use words such as Paalagi, Papalangi, Vaalagi or Papa-‘aa.

In Tamil, the foreigner is variably called Farengi, Firangi, Pirangi or Parangiar; while it is Farangi or Parangki in Malayalam. There is a town in Tamil Nadu called Parangipettai, formerly Porto Novo (a Portuguese name) on the north bank of the Vellar river.

The Persians call Afrang, Faranj, Ferang, Ferangi, Feringhi, Farang and Farangi. Interestingly, the Thai Farang is borrowed from Farsi. The Thai Farang has a place in contemporary Thai intellectual and popular thought. The idea of the Farang is seen as “the wicked Other of the Thai.” And during the Vietnam War, Thailand witnessed many American soldiers, and among them, the Black Farang. Significantly, while there is the “us-them” distinction in the Thai Farang, there is no presumption of moral or cultural superiority in the categorization of the Malay Ferringhi as the other.

Malay accounts of the arrival of the Ferringi are generally morally neutral. To the Melaka Malays, or the various Malays in the Malay Archipelago from Acheh to the Maluku, the Europeans presented just another element of arrival – all were always welcome.

Unlike the Japanese or the Chinese, the Europeans who arrived on their shores are termed as Southern barbarians. Even elephants brought in by the Portuguese as gifts to the Japanese in Kobe circa 1600 were viewed with much suspicion. In some languages, the moniker was used derogatorily for Europeans. This happened in the Hindi Farenghi, and Firangi in British India.

**Prof. Dato’ Dr. Ahmad Murad Merican is Professor of Social and Intellectual History with the International Institute of Islamic Thought and Civilization, International Islamic University (ISTACIIUM). He is a Senior Fellow with the Southeast Asia Research Centre and Hub at De La Salle University, Manila, the Philippines.