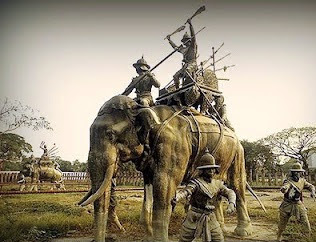 SIAMESE forces invaded Kedah in 1821 – to be exact on 12 November. That turned out to be the most brutal, bloodiest, protracted war the country has ever seen. It lasted until 1841. That war is the story of Kedah’s resistance to Siamese occupation. It has passed virtually unknown in the annals of the nation’s history.

Siam’s aggression and suzerainty over Kedah has been well narrated. But this episode evoked unhappy and angry memories amongst the Kedah natives. It began in 1820. That year, the governor of Nakorn Si’thammarat visited Bangkok on a mission that, apart from the other major issues of the anticipated Burmese invasion, was basically designed to seek King Rama II’s approval for the invasion of Kedah, and the extension of Siamese suzerainty over the other Malays states, especially Perak and Selangor.

According to historian R. Bonney in his book Kedah 1771-1821: The Search for Security and Independence (1971) the Governor had, among other things, accused Sultan Ahmad Tajuddin of being in contact with arch enemy the Burmese.

And Kedah has always been strategic and global. Kota Kuala Kedah was cosmopolitan and global for a few hundred years since the 16th century. The British “killed” it when they occupied Pulau Pinang. To the Siamese (and the British) the control of the Ithmus was vital. It provided access to both the Bay of Bengal and the Gulf of Siam. And control of the western and eastern seaboards of the northern part of the peninsular deprive either of this access.

The invasion was seen by the Siamese and the Burmese (perhaps also by the British who was privy to Siam’s intention) as having full military, diplomatic, economic and commercial implications. According to Bonney, Kedah with its ship-building centres and food resources was vital to the strategy. But the Siamese ambition to play the geopolitical game and gain control of the western seaboard bore great costs to lives and property.

Their appearance on a Sunday afternoon, 12 November of 1821 at Kota Kuala Kedah was unexpected. The Siamese explained their presence. Their armada had only wanted to procure supplies of rice for a surprise expedition against the Burmese. Soon after, heavily armed landing party slipped ashore, supported by more troops entering Kedah’s inland frontiers from the northern and eastern borders. It was well coordinated, swift and cruel. The occupation of Kedah by Siam ensued for the next two decades.

Many were tortured, speared, and bodies trampled by Siamese elephants. The unhappy memory among a small group of concerned Kedahans linger on. The people of Kedah were scattered. Some made their way to Pulau Pinang – a Kedah island whose status is still contested to this day. Between 1821 to 1823, some 11,000 fled to the island. Another 9,000 moved and settled in Seberang Perai.

Historian and scholar of Southeast Asia, Maziar Mozaffari Falarti in his 2009 thesis titled Kedah: the Foundations and Durability of Malay Kingship (later published as a book titled Malay Kingship in Kedah: Religion, Trade and Society, 2013) provided a powerful narrative of the Siamese invasion. He described the situation in Kedah then as rapidly deteriorating. Little is known about the precise population of pre-1821 Kedah, with estimates ranging from 40,000 to 180,000 but “it is thought that the population was reduced to less than 6,000 during the first six years of Siamese rule.

According to Falarti, thousands of Kedah’s population either perished or were enslaved during and after the invasion of 1821; and attempts by the Siamese to settle Siamese cultivators and other peoples in Kedah appeared to have had only limited success. The depopulation of Kedah has much ramifications on the demography of other parts of the peninsular stretching both toward the south, and the north which now Thai territory.

Even the Sultan was not spared. Soon after the Siamese invasion, they replaced Sultan Ahmad Tajuddin with his uncle and predecessor, Tunku Diauddin (or Ziaudin) who died in 1822. Sultan Ahmad Tajuddin, who acceded to the throne in 1803 (died 1845), fled to safety. He was followed by thousands of Kedah’s population. Subsequent there were revolts and uprisings in 1823-24, 1828-9, 1831-2, and 1838-9.

In 1838-9, a Malay uprising led by Tengku Mohammed Saad, the nephew of former Sultan Ahmad Tajuddin to recapture Kedah went on for six months. The Penang Gazette and Straits Chronicle dated 3rd November 1838 reported that 10 – 12,000 Malays had entered Kedah from “all directions.” This means that the resistance did not only come from within Kedah, but from other parts of Malay peninsula as well. The Perang Musuh Bisik (The War of the Whispering Enemy) can be said to be the longest war experienced by any Malay polity in memory. Kedah Darulaman turned into a wasteland, subsequently leading to the collective Malay distrust of the Siamese.

This year is the 200th anniversary of the war. Kota Kuala Kedah, the Kuala Kedah authorities, the Kedah state government and the federal government should mark its memory in more ways than a passing event. The memory of the war in the land of the Hikayat Merong Mahawangsa must be given life that it never had. A national memorial, listing all the names who vanquished must be erected.

There are no official records of those who lost their lives. Some that I spoke to in recent times put the figure as between 15,000 to 20,000. A national consciousness through a national narrative must begin in 2021. It is still not too late.

***Prof. Dato’ Dr. Ahmad Murad Merican is Professor of Social and Intellectual History with the International Institute of Islamic Thought and Civilization, International Islamic University (ISTAC-IIUM). He is a Senior Fellow with the Southeast Asia Research Centre and Hub at De La Salle University, Manila, the Philippines.